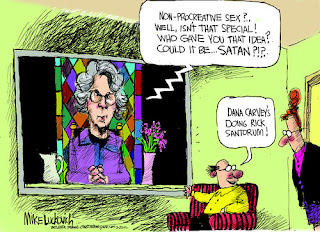 Also perhaps relevant, an article from Science in 1970 (!) that reports that a large majority of American Catholic women at that time (and surely the fraction has not declined since then) were using birth control methods disapproved of by the church.

My sense is that this is a manufactured culture war controversy designed to excite the social conservative base. More broadly, my general thought about moral issues is that if you think it is wrong, then don't do it, and make the case to others that they should not do it. If you convince everyone (or almost everyone) not to do it, then a law is unnecessary. If you don't, then a law is inappropriate.

In regard to this particular context, and putting aside moral / religious issues, I think it is a bad idea for government to mandate the contents of private health insurance policies. My sense is that these mandates are usually the result of coalitions of activists preoccupied with particular products or health conditions and providers seeking to promote their financial interests. My preference would be for the government to define a set of generic policies of varying levels of generosity, to provide focal points ideally based on the science and the economics, and then for private plans to be able to choose one of these and then be very clear about where and how they deviate. This view is a parallel to my view about the marriage contract, where I think that the government should define one or two default contracts, that private parties can then accept or else contract relative to. In complex contractual situations like marriage and health insurance, there is a public good aspect to having some reasonable default contracts around to serve as baselines / focal points.

Hat tip on the comic: Charlie Brown
Posted by econjeff at 10:43 AM