An article about them from "stylecaster" and a link to their clothing line [!].
Posted by econjeff at 2:49 PM No comments:

You've been missing the 70s, haven't you?

The hair, the glasses, the acetate shirts ....
Posted by econjeff at 6:58 PM No comments:

Bidwell was around the Harris School at Chicago when I was a grad student. orgtheory.net provides a worthy obituary.
Posted by econjeff at 6:01 AM No comments:

Book: The Worm at the Core by Sheldon Solomon, Jeff Greenberg and Tom Pyszczynski

Sheldon Solomon, Jeff Greenberg and Tom Pyszczynski. 2015. The Worm at the Core: On the Role of Death in Life. Penguin.

This book aims to draw big picture conclusions about life, the universe and everything based on a (quite large) literature of lab (mostly) experiments in which individuals primed to think about their own mortality change either their responses to researcher questions or their behavior in a wide variety of substantive domains. The authors had a hand in starting this experimental literature, and they view it as having broad implications for how society deals with quite a number of issues quite far removed from death and its rituals.

I found the case they make in the book provocative (to borrow the word used by the Financial Times reviewer quoted on the cover of the paperback edition that I purchased at my favorite bookshop in Aarhus) but ultimately incomplete for several reasons. First, the book lacks an argument as to why the results from the (mostly) lab experiments on (often) undergrads would generalize to real world behavior by other groups. This is a standard issue with lab experiments done by economists and other social scientists, of course, but it should receive serious mention in a book aimed at the intelligent non-specialist. Second, the authors describe the experiments, and they describe what they see as the big picture implications of them, but they never really provide much evidence regarding what they have in mind as the mediating causal linkages. Third, and finally, the authors do not give a sense of just how much of the variation in real world behavior in particular domains they imagine that "existential terror" (i.e. fear of death ... some truly excellent jargon indeed) explains. In a crude sense, I would like to know their estimate of the partial r-squared of existential terror in the grand regression of life. The reader could easily come away with the view that the authors think it equals one but surely it does not and equally surely that is not their view. But is it 0.01, or 0.1 or 0.01 in some domains and 0.1 in others, or what?

Posted by econjeff at 7:56 PM No comments:

There is a "shooting fish in a barrel" aspect to mocking the NYT but still ...
Posted by econjeff at 1:22 PM No comments: 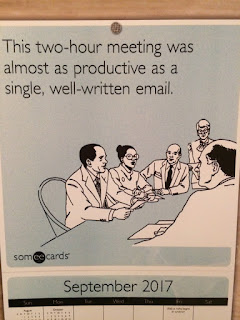 This reminds me of something ... I can't quite put my finger on it.

2. The NYT on where fake news comes from. I think the current media enthusiasm understates the difficulty of separating "fake" from not "fake" in all but the most obvious cases, of which the case in the article is one example.

3. This Atlantic piece channels The Bell Curve on the importance of worrying about Americans of low intelligence but never mentions either the book or Charles Murray. Amazing. Where was the editor on this one?

5. On the health effects of diet soft drinks. Whew! It is episodes like this that make me worry just a bit about adding press mentions to the department's annual review form that feeds into the merit pay process.

What a great idea for a course!

One can imagine a whole series of specialized follow-on courses dealing in depth with academic administration, the editorial pages of major newspapers, beltway advocacy groups, and so on.

If they want to add some local flavor they could do a class on the speech that former University of Washington president William Gerberding delivered at my graduation ceremony back in 1985. It concerned, as I recall, how the Japanese were going to bury us via their clever industrial policy.

Be sure to read the whole thing, even the (hilarious) legal disclaimer.

Hat tip: Charlie Brown
Posted by econjeff at 7:38 AM No comments:

Dave is in top form this year.
Posted by econjeff at 11:15 AM No comments: