Book: Confessions of a Bookseller by Shaun Bythell

This book chronicles a year in the life of its curmudgeonly author, who runs the largest used bookstore in Scotland.

There are tales of his eccentric employees, eccentric townspeople, eccentric Scots with books to sell, and eccentric customers. A couple examples of the latter group serve to capture the book's flavor:

A young woman bought a copy of the Kama Sutra and offered to do a reading from it for Facebook. I thought it best to decline.

Just one customer by lunchtime, huffing and puffing his way around the shop. He managed to redeem himself by spending [50 pounds] and telling me--with no apparent sense of irony--about a bookshop in Cornwall that has a huge sign at the counter which reads `NO ANECDOTES.'

Another way to get a sense of the book is to watch a couple of the videos whose creation it describes, such as the "kindle fire" video and the "night before Christmas" video.

Amidst all this fun the reader also learns a lot about the business of running a used bookstore in the modern age - e.g. the number of online orders received is recorded for each day, along with the number of said books actually found in this shop, which is often less.

I enjoyed it thoroughly but I am a bibliophile and have some Scots hiding in my family tree.

This is the other book I got at Kismet books in Verona a few weeks ago.

McWhorter is a linguistics professor at Columbia and also a bit of a public intellectual.

This sentence from the book's final chapter captures its main point:

"I have sought to help the reader actually hear Black English in a new way, to hear it as an alternate kind of English rather than as bad grammar and a lively slang."

Put differently, McWhorter wants you to think of Black English in relation to Standard American English like you would Swiss German in relation to High German or Scots in relation to standard British English. It seeks to persuade intelligent and curious non-linguists to adopt this view by providing a gentle introduction to relevant aspects of the academic literature on the substance and history of Black English. I found the case it makes compelling.

Along the way, the reader learns fun new terms like "diglossia", "monophthongization", and "variationist socio-linguistics" and receives a short lesson on the history of minstrelsy. I particularly enjoyed McWhorter's takes on Harry Reid's famous comment about Obama's speaking style and on the NFL's "who dat" New Orleans Saints t-shirt controversy. And what one might call his "third way" take on the n-word provides an elegant, linguistically grounded, and new (to me at least) way to think about an old issue.

I found McWhorter's prose a delight to read. The blurb from the New Yorker review on the back cover refers to his "intelligent breeziness" - surely a compliment we can all aspire to. McWhorter also does a fine job of deploying pop culture references. I laughed aloud on numerous occasions.

Finally, the most astounding thing about this book in this age of polarization and cancel culture is McWhorter's generosity of spirit. He assumes his reader is intelligent, reasonable, interested in learning and, perhaps, in being persuaded to change their mind, and proceeds accordingly. Amazing.

I ordered this from the soon-to-reopen-for-browsing Seminary Co-op Bookstore. You can too.

I'm not nostalgic for 2020. Probably you, dear reader, are not either. But the Apple Store seems to think its customers are, as not only is the one near us still demanding masks and distancing for all, even those long past their second shot, but our staff person made a big show of taking out little wipes and sterilizing my daughter's iphone before he would look at it. Really? Really?

Posted by econjeff at 6:09 PM No comments:

Book: The Lost Books of Jane Austen, by Janine Barchas

The title suggests the discovery of heretofore undiscovered Jane Austen manuscripts, but, alas, such is not the case. Instead, the author, an English professor at the University of Texas, concerns herself with lost editions of Jane Austen's familiar books. The missing editions are the cheap ones, which academic bibliographers often ignore in their lists. Barchas finds these cheap editions interesting because of what they tell, via their covers, their prices, and their marketing, about who was reading Jane Austen over time and across space, and about how they were thinking of her as an author. Along the way, the reader learns a great deal about how publishing worked in the 1800s and early 1900s. I had no idea, for example, that a given set of typeset plates might be used to create multiple editions of a book by different publishers over a period of decades. The reader also learns some fun bits of cultural history, including about book prizes, the Pleasant Sunday Afternoon Society, and obsessive Janeites. Finally, this is a physically beautiful book from the Johns Hopkins University Press, chock full of full-color illustrations of Jane Austen book covers.

Recommended for those of a bookish turn. 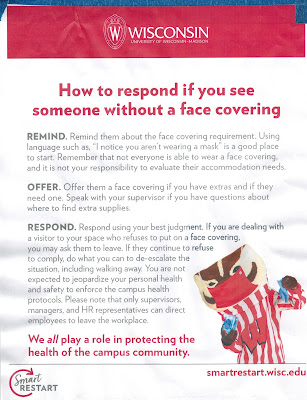 Yesterday was "mask freedom day" in Dane County and on campus at UW-Madison and most of the mask-related signs had already been taken down by the time I got in to work. But this one remained for me to claim as a COVID memento.