Obama sells out to the domestic airline industry on European carbon fees.

The point is not that Obama is someone particularly bad, just not better than the other residents at 1600 have been.
Posted by econjeff at 7:13 AM No comments:

Movie: Rise of the Guardians

Not bad for a kid movie. Beautiful animation and some bits of warmth and creativity. It was also fun to see how deliberately the movie was going after the international market.

More from A.O. Scott at the NYT who liked it just a bit less than I did.

Recommended if you are taking a kid.
Posted by econjeff at 7:11 AM No comments:

Good stuff from DDF.
Posted by econjeff at 9:26 PM No comments:


Hat tip: Jim Hines, who I believe is the motive force behind the video.
Posted by econjeff at 9:17 AM No comments:

I will confess that I did not really pay much attention to, nor have a very high opinion of, Martha Stewart until she was unjustly imprisoned in order to help advance Eliot Spitzer's career.

Now I am rather fascinated by her and her empire of domesticity. Much of what she promotes strikes me as tremendous wastes of time, but, you know, one should not criticize the harmless leisure activities of others.

In any case, the FT offers up an entertaining interview. I had no idea she is 71.
Posted by econjeff at 10:21 AM No comments: 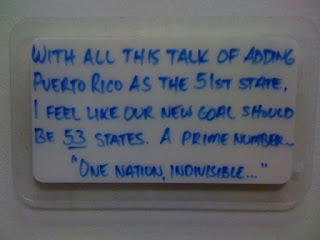 Although anecdotes that creative thoughts often arise when one is engaged in an unrelated train of thought date back thousands of years, empirical research has not yet investigated this potentially critical source of inspiration. We used an incubation paradigm to assess whether performance on validated creativity problems (the Unusual Uses Task, or UUT) can be facilitated by engaging in either a demanding task or an undemanding task that maximizes mind wandering. Compared with engaging in a demanding task, rest, or no break, engaging in an undemanding task during an incubation period led to substantial improvements in performance on previously encountered problems. Critically, the context that improved performance after the incubation period was associated with higher levels of mind wandering but not with a greater number of explicitly directed thoughts about the UUT. These data suggest that engaging in simple external tasks that allow the mind to wander may facilitate creative problem solving.

Hat tip (including the title): Charlie Brown
Posted by econjeff at 7:35 AM No comments:

Washington played so badly that, with the help of some very active zebras, they made a mediocre WSU team look good.

I suspect I am not alone in being thankful that Ty Willingham is no longer the coach of Washington's football team. Hopefully I am, though, also not alone in being glad to read that he is having an enjoyable retirement.
Posted by econjeff at 2:22 PM No comments:

The camera never seems to be working ...

... when the officer misbehaves.

A coincidence, surely.
Posted by econjeff at 1:07 PM No comments:

Why the SEC is better at football ... 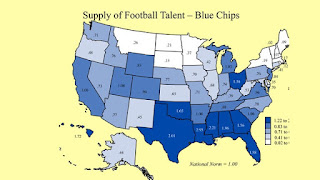 On the demise of Monitor Group

The only thing I knew about Monitor Group before reading this article is that one of my friends from graduate school used to work there many years ago. I am glad he got out before it went under and I wonder what he thought of it while he was there.
Posted by econjeff at 11:42 AM No comments:

We saw Skyfall, the new Bond movie, on Tuesday night. It is definitely the best of the Daniel Craig Bond movies. Craig's version of Bond is much richer here - still rougher than all of the previous Bonds but also more human and more interesting. Amazing locations and music too. I think this one goes in the upper quartile of Bond movies.

Recommended.
Posted by econjeff at 12:38 PM No comments:

I am reminded this morning of something that Bob Lucas told us during orientation for the graduate program in economics at Chicago. This is a paraphrase - it has been 27 years after all - but the gist was:

"I really like working on Thanksgiving and Christmas because nobody calls."

Happy Thanksgiving to all!
Posted by econjeff at 9:11 AM No comments:

This NYT piece has nothing to do with Al Gore - he didn't invent algorithms either - but very reminiscent of Tipper.

The policy ideas at the end are pretty heavy-handed but the issue is an important one.

Via instapundit.
Posted by econjeff at 7:24 PM No comments:

Ditka, Ditka's and a surprise bystander

Check out the cameo at about 0:55 on this WGN news story on former Chicago Bears coach Mike Ditka's minor stroke.

The best part is that WGN apparently has no idea who their bystander at Ditka's restaurant might be.

Via instapundit.
Posted by econjeff at 8:27 PM No comments:

On music and babies

Hat tip: someone on Facebook
Posted by econjeff at 4:07 PM No comments:

This is a thoughtful piece on how to think about ranking the presidents on their awfulness on civil liberties. There is also lots of good stuff about the excesses of the "war on terror"; many of the comments would apply as well to the "war on drugs".
Posted by econjeff at 2:20 PM No comments:

A nice piece by Ben Friedman on why smart undergraduates should write a senior thesis. It is framed around the Harvard program but the substance applies at any serious undergraduate institution.

Posted by econjeff at 9:01 PM No comments:

It never even crossed my mind that my old friend Rob McKenna might lose the governor's race in Washington State, but he did.
Posted by econjeff at 9:27 AM No comments:

Back when I was working at U of Maryland and living at Chevy Chase, I would sometimes arrange my commute so that I could have lunch in Chinatown, as that was a natural place to switch from the red line to the green line.

Often I would have Chinese food, but other times I would go to the Capital Q. I liked it both because the BBQ was good and because I felt like it functioned as a sort of temporary refuge for regular people trapped inside the beltway vortex.

I am sad that it is gone.

More generally, it is great that the area around Chinatown is doing well economically, but it is too bad that much of the character and charm are disappearing, lost in the canyons between generic beltway bandit office buildings.
Posted by econjeff at 8:54 AM No comments:

Posted by econjeff at 4:12 PM No comments:

It's okay not to vote

I will be voting on Tuesday, mainly because it is cheap here and a modestly entertaining cultural experience as well. I still quite vividly remember voting for the first time in the fall of 1980. I voted for John Anderson for president. Remember him? No, you probably don't. In any event, ahead of me in line was a stoner wearing an Ozzy Osbourne t-shirt. Realizing that the two of us would have the same influence on the election was an epiphany of sorts. A few years later, I discovered H.L. Mencken, who already had it all sorted:


I enjoy democracy immensely. It is incomparably idiotic, and hence incomparably amusing. Does it exalt dunderheads, cowards, trimmers, frauds, cads? Then the pain of seeing them go up is balanced and obliterated by the joy of seeing them come down. Is it inordinately wasteful, extravagant, dishonest? Then so is every other form of government: all alike are enemies to laborious and virtuous men. Is rascality at the very heart of it? Well, we have borne that rascality since 1776, and continue to survive. In the long run, it may turn out that rascality is necessary to human government, and even to civilization itself - that civilization, at bottom, is nothing but a colossal swindle. I do not know: I report only that when the suckers are running well the spectacle is infinitely exhilarating. But I am, it may be, a somewhat malicious man: my sympathies, when it comes to suckers, tend to be coy. What I can't make out is how any man can believe in democracy who feels for and with them, and is pained when they are debauched and made a show of. How can any man be a democrat who is sincerely a democrat?

And so it shall be again this Tuesday, regardless of whether the demopublicans or the republicrats get to shovel my tax dollars in the direction of their friends for the next four years.
Posted by econjeff at 10:50 AM No comments:

This year's freshman class at Michigan is 42.6 percent out-of-state students, the second highest proportion on record.
Posted by econjeff at 6:16 PM No comments:

2. What it means to be hoist on your own petard.

3. What the Michigan dorms used to be like. Different days.

5. Beer and poltics: the graph.

Summing up the history of mankind

Hat tip: A Facebook friend, probably Lones
Posted by econjeff at 9:41 AM No comments:

Washington's offense tried hard to lose, but Cal tried harder, with the result a Washington road victory on ESPN2 last night.
Posted by econjeff at 9:37 AM No comments: