Back to normal at Montlake in the fall?


Washington start soliciting season ticket renewals on Monday (which is months later than usual). Being an optimist, I take that to mean they expect a full stadium in the fall.
Posted by econjeff at 9:24 AM No comments:

I took over Peter's position as an Institute for Research on Poverty Summer Research Workshop co-organizer some years back. He was a great person, a great economist, and a great senior colleague for my student Shannon Seitz. He will be greatly missed.

Posted by econjeff at 9:28 PM No comments:


Nails it. Especially the travel bit. 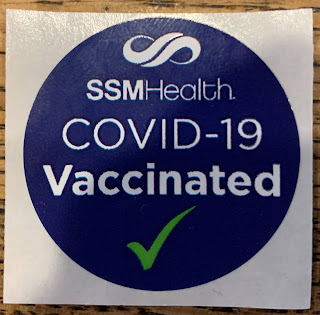 Pfizer for me.
Posted by econjeff at 10:55 AM No comments:

Book: The Box by Marc Levinson

Levinson, Marc. 2006. The Box: How the Shipping Container Made the World Smaller and the World Economy Bigger. Princeton University Press.

As its name suggests, this book offers a history of container shipping, with a particular emphasis on maritime shipping, where containerization first took hold. I found many aspects of the book interesting and useful. Let me remark on a few here:

1) I sometimes mock the first U.S. federal training initiative, the Manpower Development and Training Act (MDTA), because it was motivated in part by fears of job loss due to automation - in 1962! This book actually gives life to the origin of some of those concerns via its description of the dramatic drops in longshore employment in U.S. ports as containers and cranes replaced gangs of men loading and unloading "breakbulk" cargo. This transition is not really automation, as the cranes had human operators, but it very much is the large-scale substitution of capital for labor.

2) The tale of how standards got set for container sizes via interactions of shippers and governments within the context of various national and international standards settings institutions provides a reminder that politics, power (both economic and political) and personalities all matter for such exercises. Indeed, the story of this process could easily support a book of its own.

3) Also fascinating: the stories, separate for the east and west coasts, of how the longshoremen's unions reacted to the prospect and then the arrival of containerization. For those with rose-colored memories of the private sector trade union past, this part of the story provides helpful reminders of the days of massively inefficient work rules and crippling strikes, too.

4) For readers of a certain age, the text also rekindles fond memories of the costs created by the interstate commerce commission, which was fully captured by the industry it purported to regulate prior to its (surprisingly bipartisan) demise in the late 1970s and early 1980s.

It is an academic book written by an academic, but it is written well and at a modest technical level. I very much enjoyed it.

Posted by econjeff at 1:29 PM No comments:

Workforce development in the United States today is spread across higher education institutions (primarily public two-year and for-profit colleges), labor market institutions, and workplaces, with public funding from a range of sources. But outcomes for students and workers are weaker than they could be, especially among disadvantaged students and displaced workers; funding for workforce development programs is insufficient and not always effective. I propose the following changes: (1) Implement reforms and additional funding in the Higher Education Act of 1965 (HEA) for postsecondary occupational training for disadvantaged students. (2) Add modest taxes on worker displacement along with new funding for retraining. (3) Create a permanent version of the Trade Adjustment Assistance Community College and Career Training (TAACCCT) grants to fund partnerships among community colleges, workforce institutions, and states. Together, these actions would improve credential attainment and employment outcomes among the disadvantaged and employees at the risk of being displaced.

Harry and I disagree on several things (though we agree on more things than I would have expected when I started reading). I note only two points where we differ. First, we have different priors regarding how much of the earnings impacts of sectoral training programs in RCTs represents increased output. My prior would be about 0.2 while Harry's would be much higher. For some of the programs, views on this will affect the cost-benefit conclusion, as sectoral programs have non-trivial price tags. Second, we disagree on the virtue of wage insurance. My view can be summed up as "To those who had, more is given."

But, as always with Harry's work, I learned a lot and thought some interesting thoughts.

Posted by econjeff at 9:11 PM No comments:

Gated link to the paper.

This strikes me as a very important paper and also, at least in a prospective sense, a paper full of good news about incarceration rates for more recent cohorts.

Posted by econjeff at 6:47 PM No comments:

Book: Promise Me You'll Shoot Yourself by Florian Huber 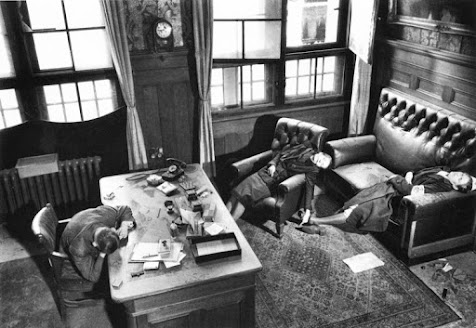 This is one of the photos in the book, quite famous in its day. It shows Kurt Lisso, city treasurer of Leipzig, and his family following their collective suicide. The photographer is American photojournalist Margaret Bourke-White.

The book documents the large volume of suicides that took place in the waning days of the Third Reich, most but not all of them in areas assigned to Russian occupation. It then uses the stories of these suicides to revisit the evergreen question of why it was that the Germans went down the Nazi road. The book combines social history, with lots of references to individual diaries and so on, with more traditional historical material that serves as context.

Recommended if the subject is of interest.

I purchased this in my first pandemic bookstore visit last summer, which was to the local Barnes and Noble in Madison.

Posted by econjeff at 9:27 PM No comments:

This is an academic ethnography of high end parties. The author is a former model (her first book is an ethnography of high fashion modeling) turned sociology professor, now tenured at Boston University. She used connections to promoters from her modeling days to set up the participant observations that underlie the book. She also did numerous formal interviews with "girls", promoters, and clients.

The book provides an inside look at an industry / sub-culture that I would never otherwise have learned about. The author is smart, and impressively well-read both inside and outside sociology. The book is clearly academic but wears its scholarship fairly lightly without losing substance. I particularly appreciated the author's empathy for all the players in the nightly drama she describes. It would be easy to judge pretty much everyone involved on many dimensions but instead she does her best to understand why the promoters promote, the clients conspicuously consume, and the "girls" show up to the clubs with the promoters despite only indirect, though nonetheless very real, compensation.

One minor negative is that the text bears the burden of a bit of Marxian jargon about "exploitation", which the author (not surprisingly) struggles unsuccessfully to integrate with her (clearly evidenced) understanding of the role of non-pecuniary compensation in this world. I would have liked a bit more discussion about supply and demand too. I expect that the supply of attractive young women interested in free dinners and free parties at high end clubs in NYC is pretty large relative to the demand, and that this fact has implications for how the surplus gets divided among the "girls", the promoters, the clients, and the club owners.. Not unrelated: the author should read about the diamond-water paradox.

I don't think I would have read this book without the enthusiastic recommendation it received from Tyler Cowen on Marginal Revolution. His conversation with the author is well worth a listen / watch, though it is more a complement to the book than a substitute for it. One highlight: Tyler gently, and somewhat indirectly, gets the author to admit that no one is really being exploited in the party economy.

One puzzle: why no picture of the author on the inside back of the dust jacket?

Definitely recommended if the subject sounds interesting to you.

I ordered this one from Seminary Coop bookstore, which I hope will still be around when next I find myself in Hyde Park in person. You can order it there too.

Posted by econjeff at 5:52 PM No comments: