The Decline of Auctions on Ebay

From the Economist, and with a nod to recent work by Dimitry Masterov.

I will confess that I am one of the people who wandered away from Ebay because of sniping.

I knew that the fraction of auctions had declined, but had no idea that it had declined so much.
Posted by econjeff at 7:11 PM No comments: 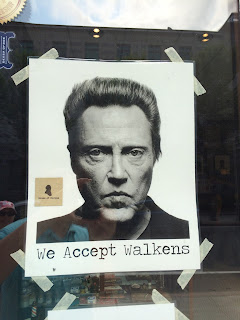 Posted by econjeff at 9:56 AM No comments:

1. Converting the skydome from baseball to football.

2. An engaging Atlantic essay on the history of what it means to be an artist.

4. Scholarships in wine economics. I'll drink to that.

5. More on the Michigan sex scandal (and Ashley Madison)

I normally do not link to things that marginal revolution also links to, on the theory that everyone who reads this blog also reads that one, but this three-part Camille Paglia interview on Salon (which I actually found on instapundit a few days before it showed up on MR) is provocative and interesting.

A thoughtful piece from the Chronicle of Higher Education.
Posted by econjeff at 8:44 AM No comments:

Yet another college quality ranking

Michigan makes the top 20, Washington does not.

Who tops the list: Wazoo! Things get boring over there in the Palouse.

The research world moves very quickly indeed, so quickly that there is already a (partial) college ranking based on the use of university email addresses at Ashley Madison.

From David Weil at Brown via marginal revolution.

I would second in particular the notion of constantly subjecting activities to a "researcher cost-benefit test". Time is the scarce resource. Also, the way to learn how to write is to write, get feedback, and write again.
Posted by econjeff at 8:09 AM 1 comment:

5. Things we used to do but do no longer.

Glenn Reynolds of instapundit has a new USA Today column on jury nullification to which I am generally sympathetic.

In addition to being a good idea in many instances, a jury nullification t-shirt is likely a really good way to avoid having to actually serve on a jury.
Posted by econjeff at 8:10 AM No comments:

The first album I ever purchased with my own money was Endless Summer by the Beach Boys. Great stuff, plus the studio footage is interesting in its own right.
Posted by econjeff at 9:30 AM No comments:

I read Michael Bliss' collective biography of the Canadian prime ministers, Right Honourable Men, shortly after I arrived at Western Ontario, I think on the recommendation of my then-colleague economic historian Knick Harley. It was a great introduction to Canadian history that I still recommend to my Canadian friends and relatives.

So, when I saw that Bliss has written his memoirs (while skipping out on the Society of Labor Economists meetings at the excellent Paragraphe bookstore in Montreal) I bought it immediately and, indeed, read it immediately. I enjoyed the book a lot. It was fun to read about life in small-town Ontario in the 1950s and to follow the full arc of an academic career. Because most of Bliss' researchers consisted of books, each of which required several years of his time, he thought hard about which projects to pursue and which not to - harder I think than most economists, including me, think about which paper ideas to pursue and which not to. These decisions are described in some detail in the book

I would have liked to learn more about Bliss' actual research process, and about his views of trends in historical research more broadly. I suppose that is a way of saying that I would have liked a bit more of an intellectual memoir in addition to the personal memoir. But still, I raced through the book and really enjoyed it, including in particular all the bits about department and university politics.

Recommended if you are in the mood for an academic memoir.

A thoughtful and saddening piece on the transformation of the job of Dean of Students at many colleges into one solely focused on sexual assault accusations by a former Dean of Students writing in the Chronicle of Higher Education.

I also liked this bit from one of the early comments by "Helen":


"...I think that reasonable people often have a very large blind spot in that we assume, when faced with something obviously unreasonable, that if we just hold tight and push on, everyone will figure it [out] that this is insanity, cooler heads will prevail, and the problem will be solved."

That more or less describes my last two years, over which time insanity is 3-0.
Posted by econjeff at 8:33 AM No comments:

On the importance of local (and global!) knowledge

This Hayakian moment rather sums up the internet.
Posted by econjeff at 8:15 AM No comments:

The Daily Mail follows in the august footsteps of Orley Asheenfelter and Alan Krueger by attending the Twins Day festival in Twinsburg, Ohio.

The article contains some great pictures of people for whom being a twin is not just a biological fact of life but also a hobby. There is even some Canadian content, eh.

Hat tip: Charlie Brown
Posted by econjeff at 7:38 AM No comments:

Comedians in Cars Getting Coffee

This "new" Jerry Seinfeld project consists of short videos wherein he hangs out with his comedian friends. It is absolutely self-indulgent: he gets to drive around in interesting cars, drink coffee (and often eat lunch) at interesting restaurants in the NY and LA areas, and he gets to hang out (and pay) his comedian friends. But the conversations are fun and often interesting as well, and I enjoy watching someone who seems to enjoy his wealth so thoroughly and with so little drama. I also like Jerry's sense of and interest in the history of comedy.

I have watched the first two seasons. The ones I enjoyed most were Carl Reiner / Mel Brooks and Michael Richards (who played Kramer on Seinfeld) in the first season and Chris Rock and David Letterman in the second.

I would be curious to know how he arranges things with the restaurant owners. Are the other customers, who generally pretend not to notice Jerry and his companions, all plants? Are they all paid?
Posted by econjeff at 9:38 AM No comments:

Employment effects of the minimum wage

Hat tip (on the link and the subject line): Charlie Brown
Posted by econjeff at 3:17 AM No comments:

The Wall Street Journal offers a fine obituary of sovietologist Robert Conquest. It includes many things I did not know - even a limerick about Lenin.
Posted by econjeff at 2:35 AM No comments:

Diane Whitmore to the Hamilton Project

Congratulations to Diane Whitmore Schanzenbach on taking the helm of the Hamilton Project at Brookings.

Though I still don't understand why anyone would name something after the wretched statist Alexander Hamilton, surely the worst of the American founders.
Posted by econjeff at 2:34 AM No comments:

An Iraq veteran on domestic policing

Some useful thoughts on excessive force and on strategy more generally.

An important theme that is left implicit, but that could usefully have been developed at greater length, is that the actions of every police officer in every department have a public goods aspect. Misbehavior by police in one jurisdiction reduce trust in, and cooperation with, police in other jurisdictions. This suggests that the optimal "tax" on such misbehavior is pretty large.
Posted by econjeff at 3:27 AM No comments:

The Ann Arbor News details the ongoing plans for the renovation of the State Theater in Ann Arbor.

Lots of nice pictures, including bits customers do not normally get to see.
Posted by econjeff at 9:47 AM No comments: