I wonder if the tree-movers have a performance contract in which they get a bonus if the tree survives?

Why not just leave it where it is and make the building a little bit taller?

Bonus: still more on the tree from the University Record.
Posted by econjeff at 6:41 AM No comments:

The Ann Arbor News is very excited about all the new businesses on 4th Avenue in downtown Ann Arbor.

4th Avenue is notable, at least to the News, because it was once Ann Arbor's "red light" district as a result of being home to one (1) adult bookstore and (1) of the wink-wink nudge-nudge sort of massage parlors. As is usual in Ann Arbor News discussions of that era, the reader is left to wonder how these businesses persisted so long when apparently everyone in town wanted them closed. This set of cool old pictures also reveals just how discreet and non-threatening the red light district was (and shows the old Montgomery Ward store too).

I also find it entertaining to read about 4th Avenue being "undiscovered". Ann Arbor's downtown is, even with a pretty generous definition, about 40 city blocks. Is it really possible for a bunch of them to go missing and require rediscovery?
Posted by econjeff at 6:40 AM No comments:

As I've mentioned on here before, I watch old television shows during my morning exercise. Most recently, I have been watching the first season of the Jetsons, the futuristic analogues of the Flintstones. Their first season started right around when I was born in the fall of 1962.

What did I learn? (1) The music is still great, as is the animation, which is quirky, creative and fun. (2) TV audiences were much less sophisticated in the early 1960s; watching, say, a Simpson's episode right after a Jetson's episode is instructive in this regard. (3) Gender roles and gender stereotypes have changed a lot. One whole Jetson's episode, for example, considered the horrifying prospect of Mrs. Jetson learning to drive. (4) The writers and producers did not put any serious effort into technological continuity across episodes. For example, sometimes dinner is flavored pills, other times it is a regular meal. Sometimes "tapes" are delivered by regular mail, other times there is a picture phone, and so on. (5) The future of the Jetsons is much more mechanical and much less electronic than the actual future turned out to be.

Good stuff, all, but probably I will not take the time to watch the second season.
Posted by econjeff at 7:53 AM No comments:

A short interview of P.J. O'Rourke from the Financial Times, with an excellent picture.
Posted by econjeff at 11:05 AM No comments:

Book: What Do Women Want? by Daniel Bergner

Bergner, Daniel. 2013 What Do Women Want? Adventures in the Science of Female Desire. Ecco / Haper Collins.

What Do Women Want? is a popular science book that reviews recent studies from a number of fields that challenge the view that women are less interested in sexual variety than men because they need a stable partner's support to raise children, while men just want to spread their genes around to the greatest extent possible. The research summarized in the book is interesting and clearly described, as are the back stories of the researchers and how they ended up doing research on sex-related topics. My favorite bits of research covered in the book concern how the number of sexual partners reported by women changes when you ask them the question when they are hooked up to a fake lie detector and how the number of women who request a second meeting in speed dating varies with whether the women get up and move around to different men or the men get up and move around to the different women.

Recommended if you are in the mood for such things.
Posted by econjeff at 11:05 AM No comments:

1. P.J. O'Rourke on the pursuit of happiness.

3. How to make a clarinet with a carrot.

4. I'm not convinced this Elizabeth Warren video isn't a parody.

Hat tip on #3 to Jackie Smith

I agree with a lot of what this writer has to say, though I think he understates the extent to which the differences result from trying to accomplish different things. Much of what statisticians try to do is not locate causal relationships but rather just fit the data or find patterns and so on. In contrast, endogeneity is not just a topic in microeconometrics, it is the overarching theme of microeconometrics.

He is surely correct that both tribes have much to learn from the other. In some ways it is resembles the commonplace that one of the best ways to really understand English is to learn a foreign language.
Posted by econjeff at 12:52 PM No comments: 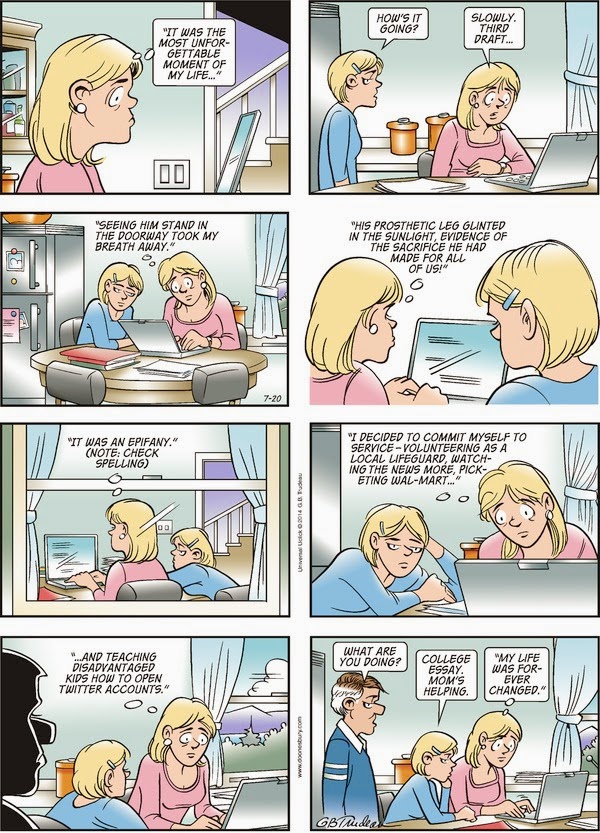 Once in a while the reader is reminded of Doonesbury's glory days.

In the Chronicle again

The Chronicle ponders various papers in the literature on college mismatch (may be gated).

Includes comments from yours truly, as well as my co-author Nora Dillon, along with a preview of the still-in-progress findings from our next paper.

I was positively impressed by my interactions with the Chronicle reporter, who did a good job of capturing the main points of our discussion.
Posted by econjeff at 12:35 PM No comments: 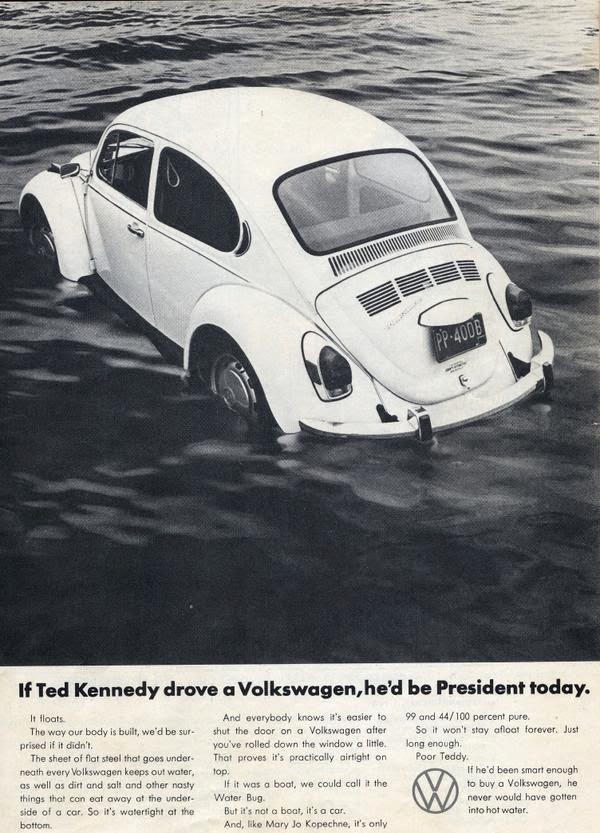 Posted by econjeff at 8:52 AM No comments:

How deep is your love?

Paris Review on the history and influence of the BeeGees, with some bonus pop psychology.

The radio station I listened to in high school, KISW in Seattle ("if it's too loud, you're too old"), had a nightly feature called "Disco Destruction" in which they would play a disco song at varying speeds and overlaid with the sounds of chain saws and wolves howling. After a minute or so, the DJ would drag the needle across the remainder of the record and immediately transit into some head-banging hard rock song. Good times.

Note to younger readers: the needle refers to the bit of the record player that came into contact with the vinyl record.
Posted by econjeff at 9:13 AM 1 comment:

Seems that after 50 or so years, Seattle is finally planning to tear down the off-ramp to nowhere on highway 520, which runs just south of the University of Washington campus and includes a floating bridge on its way to the east side of Lake Washington.
Posted by econjeff at 2:46 PM No comments:

Does this mean that Weird Al has jumped the shark?

Either way, I am sympathetic to the message, but wonder whether insulting people will really work as a motivator for them to improve their writing.

For the young(er) people, "jumped the shark" is defined here and the Schoolhouse Rock reference is explained here.

I think my main issue with this is that the sample size is not large enough, and they should have a randomized control group of people who were willing to marry a stranger but not given the opportunity to do so.

And how about those Danes, for coming up with the idea?

And how about the NY Post, which doesn't know what a spiritualist is (hint: they communicate with dead people), nor that it is "party-hearty" and not "party hardy"?

Hat tip: Marit Rehavi
Posted by econjeff at 5:22 AM No comments:

Writing at Economic Principals, Warsh defends the importance of new growth theory against criticism from Paul Krugman, among others, and illuminates some of the machinery behind the economics Nobel prize.
Posted by econjeff at 9:55 AM No comments:

The Atlantic on the Ukraine

I quite enjoyed this piece in the Atlantic on the current state of the Ukraine.

My favorite bit of text:


Viatrovych commanded one of the battalions on the Maidan, and has since returned to his job at the National Institute for Memory, where he works to create a Ukrainian identity.

More broadly, implicit in the piece is the deep problem of creating a nationalism because you have to because of competing nationalisms even though you know that, at a deep level, nationalism is a nasty, primitive business.
Posted by econjeff at 1:38 PM No comments:

Congratulations to UM grad student Olga Malkova, winner of the Heinz Koenig award from the ZEW (= zentrum fuer Europaische Wirtshaftsforschung) one of the leading German research institutes.
Posted by econjeff at 1:53 PM No comments:

Edge of Tomorrow is sort of a science fiction version of Groundhog Day, with Tom Cruise reliving the same day over and over again until he gets the bad guys (or rather, the bad alien critters).

The NYT gave it a surprisingly strong review - I think perhaps the reviewer has a thing for Tom - but to me, though it was enjoyable enough as Hollywood fluff, it seemed like a missed opportunity to create a really interesting movie.

Sort-of recommended, if you are in the mood for some low-brow time travel musings and Emily Blunt.
Posted by econjeff at 7:56 PM No comments:

"Utility is nothing more than a way of encoding choice"

- Larry Blume
Posted by econjeff at 7:56 PM No comments:

Who knew that the Washington Monument could be interpreted that way?