A dyspeptic but quite entertaining A.O. Scott calls it a "costume party run amok." It is not quite as bad as he makes out, but the cast never quite gels as an ensemble and the writing is ... well ... not as pretty as the sets.

Not really recommended.
Posted by econjeff at 8:15 AM No comments:

1. UM papyrii on your iphone.

2. Markets in everything: pet euthanasia with house calls. Dr. Tomlinson was a co-worker of mine at Farrell's Ice Cream Parlour restaurant in Southcenter mall back in the day.

4. The secrets of flight attendants.

6. Detroit News takes the high road with a piece on "sugar babbies" at universities in Michigan that reads more or less like an advertisement.

A Chip off the old block

Imagine my sadness that Oregon football head coach Chip Kelly has departed for the NFL. Boo hoo.
Posted by econjeff at 8:23 AM No comments:

Some conservatives took offense at labor economist Erica Groshen's choice of summer camp (!!!) for her kids.

The general rule applies here, as they should know: economists of any team > pretty much anyone else who might get appointed to a government position.

Really, the folks at Americans for Limited Government should have something more serious to do with their time and their donors' money. There are plenty of genuinely wretched appointments, and plenty of bits of government that could use limiting, in every administration. This isn't one of them.

And congrats to Erica on the BLS gig.

We ignore causality when it suits us ...


The Sweetland Center for Writing's Dissertation Writing Institute, now in its 10th year, is helping to boost doctoral program completion rates of graduate students. Compared with national rates of 50-60 percent, institute students complete at a rate of 88 percent.

To interpret this causally requires that students who select into the program are a random sample of all doctoral students, as is required for the causal interpretation the university gives to this difference in completion rates. That seems pretty darn unlikely, and the university makes no case for it in the RU write-up.

NB: This is not a diss on the Sweetland program. One of my students went through it and I think gained a lot from it in terms of the quality of his writing (though it had no effect on his probability of degree completion). My complaint is with the university pushing casual causal claims as part of its marketing efforts that faculty members would mercilessly mock in a seminar or refereeing context.

The NYT has a nice puff piece on the computer science department at the University of Washington, from which I received one of my two undergraduate degrees.

Some things have changed a lot since then, like the building, the department ranking, and being in the engineering school rather than arts and sciences, but some things remain, like there being "too few" slots.

Hank Levy and Ed Lazowska, mentioned in the article, were both around in my undergraduate days, and I took a very enjoyable class from Ed on operating systems. It was probably the most challenging course I took at Washington other than the first quarter of the graduate micro sequence from Gene Silverberg. At the end of it, Ed gave all the students buttons that said "I Survived Computer Science 451".
Posted by econjeff at 6:50 PM 1 comment:

George Carlin at the Actors Studio

This interview was more thoughtful and interesting than I expected. I particularly liked the remarks about drugs and about his work process.
Posted by econjeff at 8:44 AM No comments:

An astounding tale from Philadelphia that reads like something out of the 1930s.

The only weak point occurs when the author attributes, as many do, things like the 40 hour work week to unions rather than to economic development. That leisure is a normal good (i.e. people buy more of it, implicitly in this case via fewer hours, as their incomes rise) is really the only explanation required.

Via instapundit
Posted by econjeff at 9:35 PM 2 comments:

Some folks have made a letter that offers up some truly radical, and surprisingly constructive, suggestions about gun policy: collect better data and use it to increase our knowledge of the various emprical parameters that would go into a serious social benefit-cost analysis of different policies.

Also implicit in the letter, which I think is a good idea, is holding off on any policy changes until we have better evidence. This has the further beneficial effect of allowing the media frenzy to pass. We adopted very badly designed policies, e.g. the Patriot Act and Medicare Part D, in the wake of past media frenzies. We should learn from that.

I was asked to sign the letter, but declined because in its present form it is still a bit too political for me, particularly at the start. It also annoys me to refer to politicians from either team as "honorable" when 99 percent of them are quite clearly not, but that alone would not have put me off from signing.

... in the Wall Street Journal.
Posted by econjeff at 3:55 PM No comments:

The joys of running a firm in Italy

From the Wall Street Journal, a short piece on what it is like to run a small firm in Italy.
Posted by econjeff at 2:15 PM No comments:

Is there anything more embarrassing for all concerned than the personal statements that students write, and faculty read, as part of graduate admissions?

I have often thought that a most entertaining addition to skit night would consist of reading selected excerpts from the personal statements of our graduate students currently on the job market.  [I suspect that this violates some sort of federal law and/or university regulation - oh well.]

On the other hand, the over-selling in personal statements is probably good practice for writing grant proposals.

Oh, and enough with the behavioral economics already.
Posted by econjeff at 10:30 AM No comments:

I was sad to learn yesterday that Nobel laureate economist James Buchanan, co-founder with Gordon Tullock of the "public choice" sub-field of economics, has passed on.

Reading Buchanan and Tullock's book The Calculus of Consent in my undergraduate days had a big effect on my thinking about constitutions, what one might call the mechanism design of government. It remains well worth reading today. I also enjoyed Buchanan's memoir Better than Plowing.

Back in my Maryland days, I drove down to Virginia and gave a seminar at George Mason. The seminar took place in an old house that had been converted essentially into a shrine to James Buchanan (advice: win your Nobel at a school where you are the only one). He was kind enough to show up and ask questions at the seminar even though it was a paper on college quality and thus pretty far from his own interests.

Posted by econjeff at 8:30 AM No comments:

1. Organic food causes autism (or, the dangers of univariate regression, yet again)

3. The Ark - the famous folk music venue in Ann Arbor - has bought its building. I think this is great news. Hopefully we get to the Ark more often in the coming year.

5. Trying and failing to join the "mile high club".

#4 via the Agitator and #5 via instapundit
Posted by econjeff at 7:02 PM No comments:

Oh Lord, why hast thou forsaken me?

Much as I dislike saying it, Alabama versus Oregon would have been a much better game.
Posted by econjeff at 10:14 AM No comments:

Becker and Murphy on drugs

You know what I mean ... their quite sober piece in the WSJ lays out the case for relatively modest reform, mainly just decriminalization of possession.

Though the competition is fierce, the war on drugs would surely be on most short lists of "worst policy disaster ever".
Posted by econjeff at 9:37 AM 1 comment:

BBQ in walking distance of campus

RUB has opened at State and Packard.

I am looking foward to giving it a try.
Posted by econjeff at 11:58 AM No comments:

An excellent game with a disappointing outcome.

Annarbor.com coverage here.
Posted by econjeff at 4:19 PM No comments:

1. Frequent flyers who fly too much and annoy their airline.

2. You know the election is over when Slate goes after our beloved leader.

5. 2013 is the International Year of Statistics! Party on.

Cheating on the SAT?

A minor scandal in Long Island, as reported in the NYT:


Neither colleges nor high schools are ever alerted that cheating was suspected. Tom Ewing, an Educational Testing Service spokesman, said that confidentiality laws meant to protect minors prevented his company from disclosing that information. Of 2.25 million SATs taken every year, about 1,000 scores are withdrawn for misbehavior, 99 percent of which are for copying, he said.

1,000 out of 2.25 million is a pretty low rate, but it sounds like the 1000 is people who misbehave during the exam and not people taking the exam for someone else, which is in some sense much more serious.

Optimal deterrent theory, of course, suggests that when the probability of detection is low, the punishment should be large. I suspect that ETS has a better idea of how common it is for students to pay someone else to take their exam. This sort of behavior has also been an issue with the GRE and the TOEFL.

Via: instapundit
Posted by econjeff at 9:28 AM No comments: 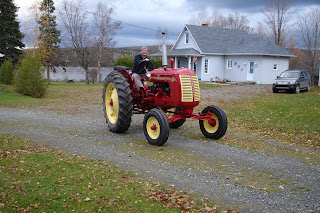 Daniel Parent with his restored tractor.

I am not sure if my hobby is going to seminars or being on dissertation committees. Maybe both.
Posted by econjeff at 5:17 PM 1 comment:

The NYT frowns without saying much, while Rolling Stone gushes. I am somewhere in between. Tom Cruise plays only one character, but he plays it well. I enjoyed this rendition better than, e.g. the latest Mission Impossible movie. This one is also interesting for how the politics of guns are handled, something I was suprised to see the NYT not mention.

Recommended if you like the character Tom Cruise plays.
Posted by econjeff at 1:01 PM No comments:

I particularly liked Dawson's performance in The Running Man, which took some character given that he is essentially parodying himself.

NYT obituary here (with not one but two corrections and missing any reference to his years on Match Game) and wikipedia page here.
Posted by econjeff at 12:48 PM No comments:

The Atlantic on Bronzeville

The Atlantic considers Bronzeville, the neighborhood northwest of Hyde Park in Chicago. The neighborhood is relatively unique in being an example of minority gentrification.

I would add a couple of thoughts. First, I do not recall hearing the area actually called Bronzeville until after the gentrification got going. When I was a grad student at Chicago, it was just the bad neighborhood you drove through on the way from Hyde Park to Midway airport. Second, I don't think that lessons from Chicago, with its long and acrimonious racial history, necessarily generalizes to places like DC, which are full of whites who would pay to a premium to live in a stable, racailly mixed neighborhood.
Posted by econjeff at 12:22 PM 1 comment:

No leadership from our "leaders", just a can kicked forward and some envy candy for the mindless part of the left.

If anyone in DC is aware that there is actually a literature on public finance, there is no real evidence of it in this deal.

Pathetic, but not unexpected, and not a very auspicious start to 2013.

Bonus: some smart words from Greg Mankiw and a fine bashing of the NYT from John Cochrane.
Posted by econjeff at 12:03 PM No comments: