This is interesting throughout. I did not know about either the conversion to Catholicism nor all the business dealings.
Posted by econjeff at 9:29 AM No comments:

Is the Senate short on space?

Note the location of this meeting. At least it is not the men's room.

A settlement has been reached in the attempted Koch brothers takeover of CATO.  The CATO press release is here, LA Times coverage is here and, perhaps most useful, former reasoner Dave Weigel summarizes here.

I think this is a good outcome. The Koch brothers are really conservatives, with a libertarian tint on some issues, and not either classical liberals or libertarians. There are already plenty of conservative think tanks in DC.
Posted by econjeff at 10:57 AM No comments:

What a mess.  I am pretty surprised that she is willing to go back.
Posted by econjeff at 7:16 AM No comments:

The New America Foundation touts savings accounts at the post office.  All that time you have to wait to get your money will decrease consumption and increase America's savings rate!

Next week at the NAF: policies to increase the number of blacksmiths in under-served poor neighborhoods.

Seriously, we should be looking for ways to move the postal service gently into the institutional hereafter, not ways to prop it up for another fifty years beyond its technological obsolescence.
Posted by econjeff at 8:18 AM No comments:

One of the unsung comparative advantages held by the British lies in the production of lowbrow television programs. On my recent visit, I discovered the gem that is "Snog, Marry, Avoid", a show in which working class women with too much makeup, too much hair, too much jewelry and probably too many vajazzles are transformed via a "make-under" into more presentable, and more employable, middle class women, at least on the outside.

Tremendous guilty fun and one more reminder, if any was necessary, of how issues of social class are never very far away in Britain.
Posted by econjeff at 6:54 AM No comments:

The NYT review is pretty close to the target on Brave. The animation is beautiful and better than the movie as a whole. The music is quite nice as well.   The writing feels a bit like the product of too many committees and focus groups but not so much that it ruins the movie. I think it is this aspect that befuddles the NYT reviewer's attempt to sort out the movie's gender politics.

I found myself waiting for Mike Elsby's appearance but somehow must have missed it.

Recommended if you have kids or just really like Scottish accents and bagpipes.
Posted by econjeff at 6:47 AM No comments:

A fine Forbes column illustrates some of the issues with moving higher education on-line.

Most notably, it is important to distinguish between putting standard lectures on line as a way to allow students to review them (or miss them) at times that work for them and creating really good lectures that are designed to replace many traditional lectures. The latter should, of course, receive a lot more in the way of time and effort in their construction, and should feature scholars who are both experts on the material being covered and good at lecturing. Think the Great Courses.

There is lots of technological and organizational change ahead, but I think the author is correct that it is still early days.
Posted by econjeff at 6:34 AM No comments:

I think people in Ann Arbor are more excited about the opening of the new Costco just south of town this coming Friday than they have been about anything else in the seven years I have lived here.
Posted by econjeff at 6:51 AM No comments:

Teresa Sullivan fired as president of the University of Virginia

Academia is all aflutter about this, particularly academia in Charlottesville, Virginia and in Ann Arbor, Michigan, where Sullivan used to be the provost at Michigan.

Virginia faculty member Daniel Willingham assigns grades to the "board of visitors", Virginia's version of a board of regents, who actually did the firing.

And Duke sociologist Kieran Healy does some mighty fine mocking.

And a surprising update from the interim president.

The puzzle to me is why the board of visitors acted so ... cavalierly.  One would think that a cabal of rich business types would not act without their lawyers and public relations people on side, and they clearly did not include them in their discussions about firing Terry Sullivan.

Hat tips to some Virginia faculty, to Dan Black and, for the pun and more, to Charlie Brown.
Posted by econjeff at 8:41 PM No comments:

Autoethnography is ethnography about yourself.  I am told it is colloquially referred to as "me-search".
Posted by econjeff at 7:27 PM No comments:

Reason and Radley Balko take down a particularly authoritarian David Brooks column that ends with this bit:


To have good leaders you have to have good followers — able to recognize just authority, admire it, be grateful for it and emulate it.

I have this vague memory that we learned something about the downside of blindly following authority in the last century.

This column is, of course, one more example of why I am not a republican.
Posted by econjeff at 4:33 AM No comments:

Bernie is great fun to watch, and the serious undertones regarding the meaning of guilt and innocence, the design of  optimal punishment regimes, and the reality of small town justice will stick with you afterwards.

It is, of course, especially fun to watch in a certain very smug small midwestern college town, where some dingdongs in the audience actually applauded after the MSNBC ad that preceded the show and featured some nationalist ranting by Rachel Maddow. [I tried to find the exact ad online but was unsuccessful - it was about windmills.]

Recommended.
Posted by econjeff at 3:28 AM No comments:

The whole thing is interesting, including in particular the bits about the artifical intelligence class that he co-taught on-line. There are big changes ahead in higher education as instruction moves, in part, on-line, but challenges remain in terms of identity verification.

Via instapundit.
Posted by econjeff at 2:51 AM No comments:

New word of the day: vajazzle

Here is the urban dictionary definition and here is an upscale vajazzle provider (with Swarovski loose cut crystals no less).

Amazing what you can learn on English television.
Posted by econjeff at 2:39 AM No comments:

2. Some good advice on getting things done.

3. Runway models falling (this is kind of sad, really, but also provides a good reminder of the value of both sensible shoes and of non-slick walking surfaces).

"Some [state] flagship [universities] are only at half mast"

Charlie Brown
Posted by econjeff at 1:33 AM No comments:

Some progress on getting a second bridge from Detroit to Windsor.

Nice of the Canadians to offer to pick up the tab.
Posted by econjeff at 11:21 AM No comments:

The Smoking Gun reports on correspondence from the locals inspired by the news that Brevard County had banned the S & M romance novel Fifty Shades of Grey from its shelves.

Methinks that the woman who noted that the book is "not the work of God" needs a reminder that the church and the state are different things, and that really, it is best that way.

It is not obvious to me that, more generally, tax dollars should be devoted to subsidizing the reading of romance novels, sexy or not, but if they are, the novels in question should be picked based on something other than religious criteria.
Posted by econjeff at 7:15 PM No comments:

Social psychology study of the day: noticing people on the street

Atlantic Cities describes a study in which a female student either gave an "air gaze" (looked without seeing), acknowledged, or acknowledged and smiled at, 282 randomly chosen passers-by on a university campus. A researcher then came by afterwards and asked about how connected people felt. Good fun.

Perhaps not surprisingly, Atlantic Cities emphasizes that the next study should look at contextual variation. I would say the next study should vary characteristics of the person giving the signals (and, what is not unrelated, have more than one person giving the signals). Perhaps we will see a Dan Hamermesh study on whether beautiful people do a better or worse job of generating feelings of social connection sometime soon ...

Also, while the summary is explicit that the subjects were randomly chosen, it is not clear that the treatments were; this matters.

Bonus statistics question: is the sample size in this study one or 282?
Posted by econjeff at 10:04 PM No comments: 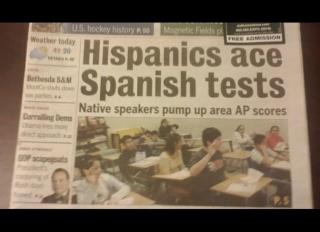 The NYT reports on the effects, largely if not entirely negative, of increased border enforcement in Forks, Washington, out on the Olympic peninsula.


Last year, however, a Border Patrol agent based in Port Angeles testified before Congress that he and other agents there considered it a “black hole” with “no purpose, no mission.” The agent, Christian Sanchez, said his supervisors told him “to just drive” around the peninsula during his shift.

That flushing sound you hear is your tax dollars.

Can you tell me how to get to Guantanamo Bay?

The value of Mayor Bloomberg's time

Reason has a fine takedown of this silly soft drink policy proposal.

My (assuming he makes the right decision) future colleague Justin Wolfers tweets (at 2:14 PM on 5/31):


When libertarians fret about carrying two small cups of soda instead of one Big Gulp, they impress me with their passion for tiny nonsense.

Now Justin is a very busy fellow, so I am sure that it was merely an oversight on his part that he failed to write what he surely actually had in mind, which is:


When New York mayors fret about people carrying two small cups of soda instead of one Big Gulp, they impress me with their passion for tiny nonsense.

N.B. I think there is some way to actually link to tweets, but not being a twitter, I don't know what it is.

One the most disgusting, and entertaining, book reviews I have ever read.