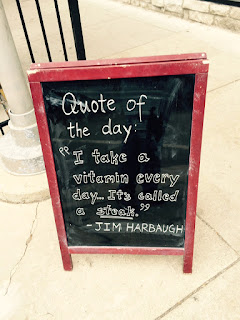 Sign outside of Knight's downtown (in the former Borders #1) on Friday.

Clearly, I do not get enough vitamins.
Posted by econjeff at 10:18 AM No comments:

Full episode of "The Profit" on Farrell's Ice Cream Parlour

I think fixing up the candy section is an excellent idea, as is closing failed locations. I would not have changed the font on the FARRELLS sign. More generally it is amazing what a smart person willing to speak honestly can accomplish.
Posted by econjeff at 8:06 AM No comments:

1. The government is just another name for the things we do together.

2. Tyler Cowen recalls the Miracle of the Futures. I was always a bit surprised that this did not get more mainstream coverage back in the day.

3. Congratulations to Demetra Nightengale at DOL on winning the 2016 APPAM Exemplar Award.

4. On the demography of college towns.

5. An update on Ann Arbor's State Theater, which is now closed for renovations.

Former Michigan graduate student Jason Kerwin, now at Minnesota in their Department of Applied Economics, is interviewed about the research from his job market paper.
Posted by econjeff at 7:54 PM No comments:

Movie: For the Love of Spock

There is nothing very deep here, and I would have liked more detail about the apparently rocky relationship between Leonard Nimoy and the filmmaker, his son Adam Nimoy. How could two such apparently nice people not get along?

My favorite bits were the remarkably thoughtful interviews with the actors from the reboot movies and, of course, the bombastic William Shatner. Oh, and the short bit about fan-generated "slash" fiction and related videos.

The NYT review does not have much to say.

An obituary of sorts from the ringer.

The Producers remains one of my favorite movies of all time. I can still quite vividly recall laughing so hard I cried at the famous dance number about springtime the first time I saw it.
Posted by econjeff at 6:48 PM No comments:

Book: The Story of Australia's People by Geoffrey Blainey

Blainey, Geoffrey. 2015. The Story of Australia's People: The Rise and Fall of Ancient Australia. Penguin / Viking.

This is an economic (mostly) history of Australia from prehistoric times until about 1850. Much of the book concerns how the aborigines got along prior to the European invasion in the late 1700s. I found this the most interesting part of the book, mainly because I knew the least about it. You can feel Blainey's interest in, and knowledge of, how the aborigines led their economic lives and how the wild variety of climate and terrain within Australia affected those lives. The other part I found most interesting described the massive and quite rapid growth of pastoral industries (mostly raising sheep) in Australia in the first half of the 19th century.. Blainey, a widely published and widely-read author within Australia (with his own wikipedia page), writes for an intelligent popular audience. I would not have minded a more academic treatment, but you can tell that Blainey has read the relevant academic literature. Also, this is very much an economic history; do not expect much discussion of the dreamtime or other more cultural and religious aspects of aboriginal (or European settler) life.

Recommended as an accessible introduction to the topic.

Amazon page.
Dymock's page (the Aussie bookstore chain where I bought the book)

Posted by econjeff at 1:53 PM No comments: 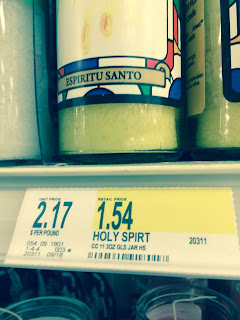 From a Chicago Target store.
Posted by econjeff at 1:53 PM No comments:

Below is the IES News Flash about the third-year follow-up report from their experimental evaluation of the TIF program, which provides strong financial performance incentives to teachers.

What amazes me most about the program is not the impacts on test scores but rather how much trouble they have had trying to get the teachers to understand their budget sets.

Full disclosure: I am a member of the Technical Working Group for the evaluation.

Changes implemented by school districts through federal Teacher Incentive Fund (TIF) grants had small, positive impacts on students’ reading and math achievement, according to a new evaluation report. The report also finds that implementation was similar across the three years, but districts reported fewer implementation challenges in the third year of the grant.

The Institute of Education Sciences released the third of four planned evaluation reports on the TIF grants, which were awarded in 2010 to support performance-based compensation systems for teachers and principals in high-need schools. The report, conducted by IES’ National Center for Education Evaluation and Regional Assistance (NCEE), provides basic implementation information for all 2010 TIF grantees. It also provides more in-depth implementation and impact information for 10 evaluation districts that agreed to participate in a random assignment study.

In the recent reauthorization of the Elementary and Secondary Education Act (ESEA), TIF was renamed the Teacher and School Leader Incentive Program.

The report’s main findings among all 2010 TIF districts are:

• In the third year of the grant, most districts (88 percent) implemented at least 3 of the 4 required components for teachers. This was similar to findings of the previous two years; and

The main findings among the 10 evaluation districts participating in the impact study are:

• After three years of TIF implementation, average student achievement remained 1 to 2 percentile points higher in schools that offered pay-for-performance bonuses than in schools that did not. This difference was equivalent to a gain of about four additional weeks of learning;

• Teachers’ understanding of performance measures continued to improve, but only about 60 percent of teachers correctly reported that they were eligible for a performance bonus; and

Posted by econjeff at 4:41 PM No comments:

The first episode of the original series aired September 8, 1966.

Wired tries to imagine the counterfactual world without it.

And Paramount has a video.

Gene Roddenberry went around showing a blooper reel and answering questions about the show in the late 60s after the original series had been cancelled. My dad, an engineer who subscribed to Galaxy and Analog magazines while I was growing up, took me to see his show at the Seattle Coliseum. Geek memories.
Posted by econjeff at 8:26 AM No comments:

The video is here. It takes a while to start.

I was interested to learn that there will be columns by Virginia Postrel and by Dierdre McCloskey going forward. I was entertained to hear the phrase "Milton Friedman was a wuss" but have to admit to being very much an incrementalist myself. And how many other political magazines have had one cool female editor, let alone two?
Posted by econjeff at 6:26 PM No comments:

1. Frontiers of human sexuality, in Ohio.

2. There is no Great Stagnation: placenta edition

3. Which R1 universities get "green light" speech code ratings from the Foundation for Individual Rights in Education (FIRE)? Only one current Big Ten school and only two Pac-12 schools. Sad.

Movie: Kubo and the Two Strings

Visually stunning, sweet without being saccharine and just different. Who expected a Hollywood movie promoting (a watered down version of) ancestor worship?

NYT liked it too.

Recommended..
Posted by econjeff at 9:44 AM No comments:

Hat tip on the first to the deputy dean.
Posted by econjeff at 3:37 PM No comments: