If only we could train deans to sit and do nothing ...

Hat tip: Charlie Brown
Posted by econjeff at 9:06 AM No comments:

The USC policy school hires a new faculty member who is ideally suited to dealing with student complaints about grades.

Rice economics on the move

They've hired Antonio Merlo and, I am told, others as well.

Hat tip: Mel Stephens
Posted by econjeff at 8:30 AM No comments:

I thought the last paragraph was too kind to both Putin and the Obama administration, but overall the FP does a nice job of charting Putin's journey from pragmatist to nationalist church lady.
Posted by econjeff at 8:29 AM No comments:

The building at 611.5 William Street

I have always wondered about the building on William between (what used to be) White Market and New York Pizza. Michigan Today provides the history, which involves Gerald Ford and black robes.
Posted by econjeff at 8:26 AM No comments:

1. New Springfield subway map from the Simpson's. It's sweet that the innocent Atlantic Cities writer can't figure out what "Jerk Circle" might be about.

2. A cool video about an eccentric photographer in NYC.

3. A fine Expose from the Atlantic about how the NFL exploits the taxpayer.

5. The Economist on work, leisure and social class. I am surprised they did not reference this fine paper.

Hat tip: ASAK
Posted by econjeff at 5:49 PM No comments:

From the Michigan Daily.

I like it that the winner and runner-up for best new business are World of Beer and Literati, respectively.

Perhaps next year someone clever will open a bookstore with a bar ...

Addendum: According to Ozy, I am not the only one who thinks combining books and beer is a good idea.
Posted by econjeff at 11:31 AM No comments:

I really like the way the Honest Courtesan links to various government abuses by using that ridiculous phrase, so I have decided to do the same:

1. Traffic tickets in Florida for those speeding to the hospital.

2. Doubling down on out-of-control joggers in Austin.

As to the phrase itself, "choose" seems like an odd word for an institution is fundamental feature is a monopoly on the legal use of violence.
Posted by econjeff at 6:25 PM No comments: 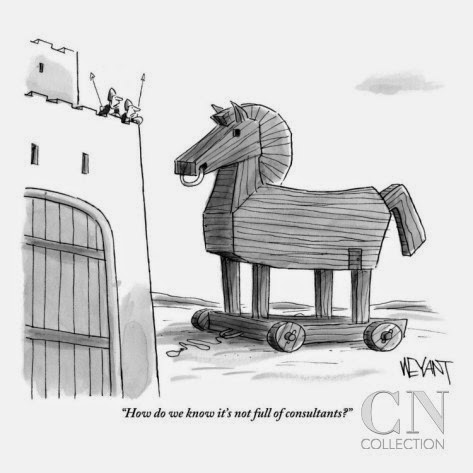 From the New Yorker.
Posted by econjeff at 6:24 PM No comments:

This fellow called Jesse Schell is an "Assistant Professor of Entertainment Technology" at CMU. Why didn't anyone mention this career path when I was playing SimCity back in grad school?

The University of Michigan's Ann Arbor campus has been recognized by whomever does the recognizing of such things as a "Tree Campus USA" for the sixth year in a row.

In other news, yesterday the university sawed down several perfectly healthy trees outside of Lorch Hall, home of the economics department. Rumor has it that the trees were removed so that the ugly construction trailers that have been present outside our building for almost my entire career at Michigan, but which disappeared a few weeks ago, can be replaced by more spacious ugly construction trailers so as to facilitate the next round of construction at the busyness school next door.

We saw Grand Budapest on Friday night at the State Theater. It is a complete delight: crazy, original, funny, at times sad, visually rich, and overall just an excellent way to spend a couple of hours. I completely concur with the glowing review by A.O. Scott in the NYT.
Posted by econjeff at 2:50 PM No comments:

The Atlantic reports on the reaction of some college teachers to a student who advertised on Craig's List for someone to help them cheat on a placement exam and possibly also an on-line course.

People do cheat, even at Michigan. Of the three places I have been, I liked Maryland's process for dealing with cheaters best. It involved (in part) students judging other students, and the students were typically much tougher on cheaters than administrators. Michigan's process works reasonably well too, but is a bit more lenient than I would like.

Western Ontario, at least when I was there, was neither as organized as Maryland and Michigan in how it handled cheaters nor as tough. I had a student at Western who plagiarized on their honors thesis (!). I wanted to toss him out of the program but in the end was only able to give him a low grade. He had the temerity to come back a few days later and ask for more points. That day was the closest I ever came to physically harming a student.
Posted by econjeff at 1:28 PM No comments:

2. Mocking Rob Ford at the Atlantic.

3. Urban ruins: Rochester subway (and be sure to click through to the old promotional video). They should make lemonade from lemons and do something like the Underground Tour in Seattle.

Klaus Zimmerman writes about the minimum wage in Germany in the Wall Street Journal.

Globalization is cool.
Posted by econjeff at 8:44 AM No comments:

Whatever you think about raising the minimum wage, it is hard to see how it is a good use of tax dollars for the president to travel to Ann Arbor, disrupt traffic, and draw students away from their classes (including one from mine) just so he can have a Reuben at Zingerman's and give a speech that could equally well been given on the white house lawn (or not at all, given that it has already been given several times before).

This looks more like an indulgence of presidential vanity than a serious use of either public funds or the president's time to me (and I would note, of course, that such trips are a bipartisan affront to the taxpayer as all recent presidents have done this sort of thing).
Posted by econjeff at 6:11 AM No comments:

I had a student write down a list of all of the crazy stuff I said in one semester of undergraduate econometrics and email it to me at the end of the semester. Pretty scary.